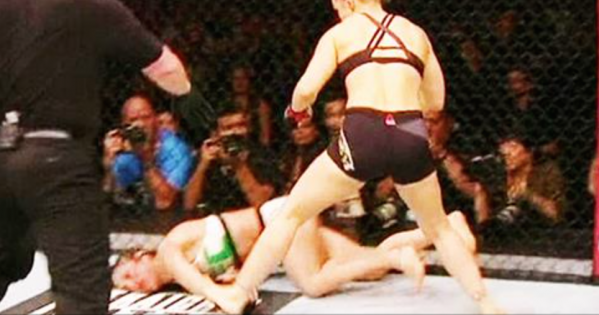 Top Image is a screenshot courtesy of the blog site (WWW.Secretsofthefed.com).

Bethe Correia is no longer undefeated (9-1 record) and now a special member of the OTBR OH NO Series club.

Remember a couple months back when she was not only boasting how she was going to easily win and beat up Ronda, but also made an insensitive joke about Ronda Rousey’s father, who committed suicide when Ronda was a child?

After bragging about how she was going to show everyone that Rousey was fake and weak etc., and Correia was going to show she was the real champ, she said “After she (Ronda Rousey) realizes she is not what she thinks she is I don’t know what might happen. I hope she does not kill herself after.”, then proceeded to laugh.  That quote put Correia into the OTBR OH NO club.

Here is a quick interview of Ronda before the UFC Women’s Bantamweight title fight and her response. The video is courtesy of (Ronda Rousey Web/Sports Illustrated Now).

Ronda normally uses her expert Judo skills to force her opponents to tap out, but she can also strike with the best of them and proved it as she allowed Correia to feel continuous thunder from the Rousey fists as well as a knee to the ribs. The scheduled donnybrook lasted 34 seconds, which is a long, long time if you are alone in the cage with the champ, Ronda Rousey, who remains undefeated in her MMA career at 12-0 and is now 6-0 while in the UFC.

Correia got her dose of medicine in front of her home crowd. Check out the highlights below courtesy of (UFC Highlights).