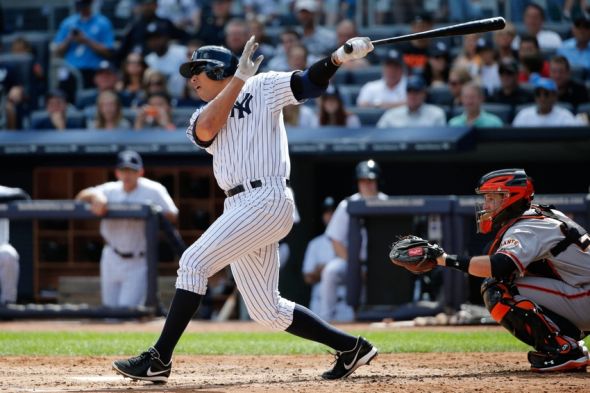 I know there is a lot of baseball to still be played, but let’s not kid ourselves, in the American League, there are very few contenders left. Some years a bunch of teams are still in it, but this year it feels like the standings could likely already be set.

If you are a New York Yankee fan, could life be much sweeter? At 53-42, they are 5 games up on the 49-48 Toronto Blue Jays and their bitter rival, the Boston Red Sox are buried in last place after a pitiful 2 and 8 in their last ten games. And quietly, Mr. Alex Rodriguez, the Yankee third baseman, is piling up nice numbers, 20 home runs, 54 RBI, and a .272 batting average. We know the Yankees will pull a couple nice trades to beef up their starting rotation and their lineup.

However, The Los Angeles Angels  (54-41) and Houston Astros (55-43) could provide a thrilling matchup for the western division crown into autumn with the Angels only up half a game, even if it isn’t traditional.

Over in the National League, we can anticipate more excitement.  In the eastern division it is a two horse race, between the New York Mets and the Washington Nationals, or ‘Nats, with neither team exactly tearing it up. The ‘Nats are in first, but only 7 games above .500.

In the central, the Saint Louis Cardinals continue to be a powerhouse as they are an astounding 62-34, if they keep this up they will win an amazing 105 games! In second place and at 56-40 the Pittsburgh Pirates are a tough team, currently on pace for 94 or 95 victories. Obviously, the Cardinals are winning this division unless they tank, but that is not a part of their history. Instead, expect the young Chicago Cubs to make a play for the second wild card spot. They are 51-44 with loads of youngsters and nothing to lose.

Now for baseball fans begging for tradition, trust me you are covered with the National League western division race.  The San Francisco Giants (51-44) are warming up as they have now won, 8 out of 10 games and are just 3.5 games behind the first place Los Angeles Dodgers (56-44). How many times have these two all-time great franchises duked it out for a pennant race? And the baseball gods are allowing these two foes to face each other 7 times (3 in LA and 4 in SF) down the stretch. For their last match on October 1st, only 8,412 tickets remain already, as I write this.

The National League post-season could potentially bring us many exciting matchups: What if somebody ties the Cubs for the second wild card spot, requiring an extra game? What if the Dodgers got to play the Giants in the playoffs?

What if the Toronto Bluejays or ‘jays, swing a couple late deals and make a wild card run? It’s been a long-time since the ‘jays have played October baseball, 1993,..that is a whole generation of fans, suffering, crying for mercy. Even just a wildcard game would give them some excitement.

Interesting things could happen for the World Series too: the Los Angeles Angels versus the Los Angeles Dodgers in the Hollywood Series, or San Francisco Giants (today’s dynasty with 3 world Championships in 5 years) against the most successful professional sports franchise on the globe, New York Yankees , for once though since it’s been a while, (in their world, six years since a title is an eternity) Yankee fan would have Trophy Envy.

How about the Los Angeles Angels versus the Saint Louis Cardinals with Albert Pujols going up against his old team? What if it goes new school and we have the Houston Astros versus the Washington Nationals and their All-Star outfielder Bryce Harper?

Okay, I know, lots of baseball still to be played.