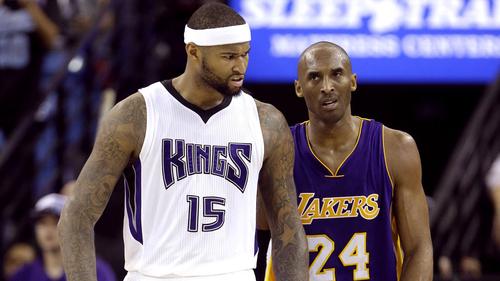 (Top Image courtesy of a screenshot from ESPN 1st Take)

Kobe Bryant and DeMarcus “Boogie” Cousins deserve each other. No other two players in all of the NBA would be more fun to watch if paired together. Just Imagine the 6 ft. 6 in. Five-time NBA Champ and Seven-time Western Conference Champ Kobe Bryant, who even at 36 can still stroke in a smooth 22 point average if he stays healthy paired up, with a 24 year old, 6 ft. 11 in. , 270 pounds of might, DeMarcus Cousins, who last season scored 24.1 ppg, ripped 12.7 boards and swatted 1.7 shots per contest, on the same squad.

Nobody’s come close to controlling Cousins since entering the league. From fighting with players, getting kicked off a team plane, and even being suspended for approaching Spurs color commentator and former player Sean Elliott after a game some say Cousins is too toxic to bring into any NBA locker room.

The man who they call “Boogie” acts the way he does be because of the team he plays for plain and simple. He’s been handed the keys to the franchise since being re-signed to a 4 year 62 million dollar contract extension in 2013. Problem is, Demarcus knows he’s untouchable with keys in pocket. Coached by guys with less than thrilling resumes like Paul Westphal and Mike Malone there’s no one in the organization to really check the highly talented center or reel him in when necessary.

Deep down Cousins has to know this is a franchise that’s poor in evaluating talent with questionable at best ownership (Kings owner Vivic Ranadive who’s big on analytics, recently pitched the idea he wants to play 4 on 5 defense in the NBA). This is a team that hasn’t come any closer to winning a championship because of swinging and missing in the draft on guys like: Thomas Robinson, Ben McLemore, and Nik Stauskus.

The three best players DeMarcus has ever played with are Tyreke Evans, Isiah Thomas, and the highly overrated Rudy Gay if that tells you anything and none of those guys played with one another except for Gay and Thomas briefly. The writing’s on the wall, Cousins needs a change of scenery and Sacremento (Sac Town) needs to hit the reset button.

Enter George Karl. Karl is a long time NBA general who’s coached the Carmelo Anthonys, Ray Allens, and Gary Paytons of the world. This isn’t Georges first rodeo, he knows this a league where after all is said and done players have more control than coaches in most organizations. He also knows that there’s going to be no way to galvanize a young Kings roster while Cousins is around. Not after all the things he’s done to defy the organization.

Not to mention the drafting of Willie Cauley-Stein, another highly touted University of Kentucky center who’s a more athletic defensive version of Cousins. In truth DeMarcus deserves better. He’s the best center in the league and another NBA phenom who desperately needs to play on a team that matters.

Has he acted wildly immature as a player and person since entering the league? Yes he has but I don’t think he’s a lost cause by any stretch. This is a guy who’s improved every year and nobody can deny his talent or intensity level on the court. From calling Mike Dunleavy, “a clown,” scolding a teammate for helping Chris Paul up off the floor (they dislike each other a lot which is another reason I’d like to see him in a Lakers uniform), to trash talking Tim Duncan, yes TIM FREAKIN’ DUNCAN, Cousins backs down from nobody, he’s a pit bull.

Having only played in one all star game since being drafted, ironically Cousins replaced the injured Kobe Bryant for the Western Conference in 2015. Playing in Los Angeles beside Bryant would yield a lot more all star selections.

For his entire career it feels like Kobe Bryant has been searching for someone to match his intensity and work ethic. Just recently Kobe admitted in an interview that he once made a teammate cry and we all remember the video clip that surfaced last season showing the Lakers practicing while a furious Bryant was seen verbally abusing teammates calling them, “Charmin soft.” Bryant is the definition of an alpha dog athlete with an insane ego.

A lot of guys bristle at the thought of playing with him at this point in his career with the clout he has within that Los Angeles organization. Cousins would relish it. I see him and Bryant clicking on a level he never really has with any other teammate in his career. Cousins is the anti Dwight Howard character I think Kobe’s been searching for the last 5 years. Byron Scott is a guy who would demand the big man’s respect as well.

Cousins reminds me of one my favorite all time NBA players Rasheed Wallace. For much of Wallace’s career he was one of or the most talented player on the court. It wasn’t until he arrived in Detroit to play with Chauncey Billups and be coached by a Larry Brown that we got to see Rasheed really flourish.

Put Cousins in Staples, Bryant in his ear telling him he’s the best center in the NBA and that no one can stop him, and let’s see him play meaningful games in May and June. It would be must watch T.V.

After just drafting D’Angelo Russell who I believe in a few years will be in the Paul, Curry, Westbrook (as a point guard who can score and pass) discussion this is obviously a team on the rise. Julius Randle is another Kentucky guy who figures in the mix after breaking his leg in the first regular season game last year.

Jordan Clarkson is a nice piece as well (Although he’d likely be in a deal that would send Cousins to LA). Throw DeMarcus Cousins in the mix and we’ve got ourselves a playoff team. Bottom line is the Lakers want to win now and send one of their greatest players in franchise history off into the sunset with a team that can compete in the Western Conference.

Boogie Cousins is just crazy enough to make it work in La La land with the Black Mamba. It’s a long shot he’ll play in LA but there’s no doubt a Kobe-Boogie combination is a match made in heaven.