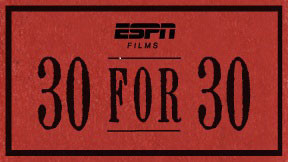 I didn’t know much about the East Coast versus West Coast hip hop rivalry.  I honestly didn’t care who Suge Knight’s and Tupac Shakur’s industry enemies were.  I never had hatred for colleagues at other companies, so I didn’t really comprehend it.

But Reggie Rock Bythewood’s “One Night in Vegas” story about the night that Tupac was shot after the Mike Tyson / Bruce Seldon WBA Title fight on September 7, 1996 captivated me for the entire hour.

Considering I was a poor college kid in 1996, and certainly didn’t have the cash to for the Pay-per-View fight, I only vaguely remember the “dive” that Seldon was claimed to take that night before Tupac was shot near Koval and Flamingo in Las Vegas. 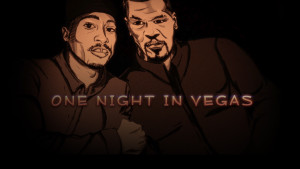 Bythewood’s film opened my eyes to ESPN’s “30 for 30” series, aka yet another gift to ESPN from Bill Simmons.  Once I saw it, I was hooked.  In case you don’t know the “30 for 30” series, each episode is basically a short film that focuses on a singular event, athlete, or team in sports history.

I think I watched about half of the “30 for 30” films in 2009/2010 when the series debuted, starting with Blytewood’s, .  Learning where Ricky Williams went after he quit football, because we were told by the media that he just wanted to smoke pot.  Or Michael Jordan’s baseball career and first basketball comeback.  Or Fernando Valenzuela shutting down opposing hitters as a 19 year old from Mexico.

But my absolute favorite…the one that gives me goose bumps every time I watch it… “Four Days In October“.  The “Curse of the Bambino”.  The “idiots” versus the “Evil Empire”.  Sports greatest comeback from being down 3-0 in the playoffs, after losing 19-8 in Game 3, and down 4-3 in the ninth inning of Game 4. 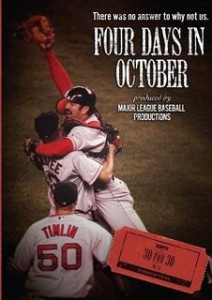 Then comes “the steal“.  Dave Roberts had a decent major league career.  But for the rest of his life, he will never have to pay for a meal in New England.  Because he stole a base. 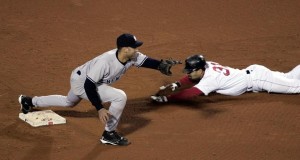 Bill Simmons originally envisioned “30 for 30” to be a series of just 30 films.  But when something is going good, they have to keep it going, and the series is still going strong.

To make it easy for you, you can get it by clicking the link below for the series on Amazon.  You’re welcome!