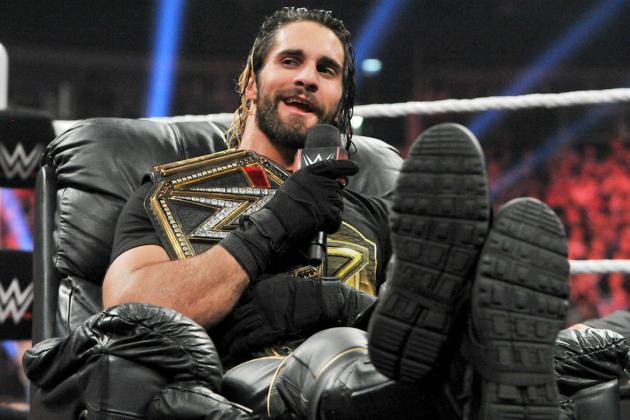 He’s whiny, he cheats, he knows exactly how to push his opponents buttons, he sometimes passes as a spoiled brat, and sometimes his actions and success can really get under your skin. No, I’m not talking about Tom Brady, this is a piece on WWE Champion Seth Rollins. He’s truly turning into a perfect heel for the WWE.

While WWE is currently struggling with truly putting a face in front of its product, stars like Daniel Bryan can’t stay healthy (hopefully not the end for that guy), stars like Roman Reigns just aren’t quite there yet, and mega stars like Lesnar are too absent to impact the program, having a great heel at the top of that ladder makes for a great show. Rollins is able to annoy all the stars reaching for his belt with the use of a smooth promo, he can weasel his way into a win regardless of the cards being stacked against him, sometimes thanks to the Authority…he’s currently ready to push his status beyond everyone around him. The future truly is now.

But what Seth really needs, in my opinion, is a clear strong victory over his opponents. Because as long as he has to “find ways” to score a win over his opponents, he will never seem like a legitimate threat in a match. Triple H at his best, at his strongest as a heel was still feared by every WWE wrestler. Seth as a heel, while very good, could be even greater by improving his methods of victory. Sneaking victories here and there can only go so far, especially as WWE Champion.

With WWE Payback airing this Sunday, the WWE Title picture is crowded in a Fatal 4 Way Match, but if Seth can really beat out his three biggest threats at once, hopefully without too much help by outside members, he can really seal the deal on his status as the WWE’s true heel and prove he is the man to beat.