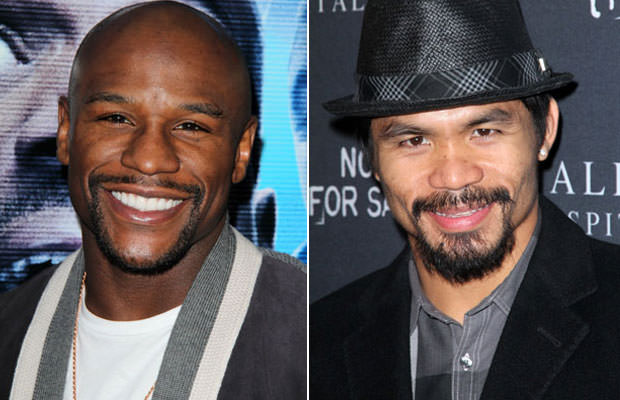 Top photo is (Courtesy of Bigstock)

On Saturday night, May 2nd, only one of these tough hombres [Floyd Mayweather Jr. vs. Manny Pacquiao] is leaving with the grin you see above. It is also a safe bet that even the winner will leave with a lot of bruises. No one is coming out of this donnybrook untouched.

Everyone is making their predictions.

I read one article which predicts a draw based on a conspiracy theory that a re-match will then have to take place. Boxing has been rumored to fix a few things, so that it can milk a cash cow and I can see why that prediction is there.

Fellow welterweight greats, Juan Manuel Marquez, Shane Mosley, and Ricky Hatton, who all have tangled with both guys are picking Mayweather to come out the victor.

Another all-time great and welterweight, Oscar De La Hoya, also battled both and is picking Pacquiao to win.

In fact, more than half of the experts in boxing and the ‘Vegas sports book experts are projecting Mayweather to remain undefeated.  For example at Oddsshark.com as of last evening (April 27th), Mayweather is a -225 favorite, while Pacquiao is a +175 underdog.

It seems a little more than half of the boxing fans and casual sports enthusiasts are pulling for the underdog, Manny Pacquiao. Count me in as one of those who is rooting for the underdog, he appears to be the more likeable person and let’s not forget Mayweather did plead guilty (if one is innocent it is hard to see why one would plead guilty)  to a domestic violence charge against the mother of his children in 2011. I can’t root for a dude who has pled guilty to such actions. Yet, cheering, and predicting are two different things.

So what do I think is going to happen? I think this fight will never live up to the hype and six years of waiting and waiting, and waiting. Neither fighter is physically in his prime anymore, so they may both be a little more cautious than normal especially knowing the end is near they want to protect themselves from a lot of damage. Early parts of many rounds are going to resemble dancing with the stars instead of a prize fight.

Mayweather is known to begin fights slow while Pacquiao is known to rush over like a TORNADO and go for the kill as early as possible and stay on the attack every round relentlessly no matter what. This is the untouchable force versus the perpetual unstoppable wave.

Round one is going to be more boring than normal. Don’t worry if you miss it. Usually fighters don’t do much in round one, they study each other’s rhythm and movements, looking for cues like a ‘poker tell’. Expect the pace of action to pick up in round 2, that is when Pacquiao’s trainer will tell him to look to make some moves and score points.

Throughout the fight, Mayweather will roll his left front shoulder and use it as a shield, he will do a lot of twisting, evading, ducking, and dancing away. He will occasionally fire single jabs and wait for an opportunity to safely rip a counter right hand. He will try to use the rope a dope tactic to cause his opponent to miss him and wear down then counter a combination and move away. If he gets in any trouble, he will literally hug his opponent until the ref’ breaks it up. Only in the last 20 seconds of rounds will Mayweather go on the attack and throw a flurry of punches to try to win the round. I think Pacquiao will try to position himself to trap Mayweather and instead win the rounds.

Pacquiao will be more proactive, but I think he will use more caution. He can’t afford to go into blitz mode and leave his face open, every one who has tried that against Mayweather gets trapped into a face pummeling. I don’t think he will go at it relentlessly every round like usual either. I think he will move around like a predator who is stalking his prey, pick his spots and only go in for the kill if he sees an open opportunity, and especially drill shots to Mayweather’s body more than his face early. He will assault Mayweather from different angles, and he will try to bait Mayweather from outside of his range into traps get Mayweather to come after him, with his guard down. I have actually watched Manny Pacquiao do this before to other taller fighters with more reach and it works well. Then, again Mayweather is not known to get into other boxer’s traps often.

A lot of the time Pacquiao will move toward Mayweather’s left to  create an opening on Mayweather’s shoulder roll style, but Pacquiao will also do the unexpected unorthodox move and rotate the other way actually towards Mayweather’s right hand, yet bringing his own deadly left mitt closer to Mayweather. Pacquiao is going to be more patient than most fights to preserve energy for the later rounds. He will go for smaller combinations (2-3 punches) and move away, not the usual 5-7 punches, {unless he smells blood then he will not hesitate} otherwise he risks punching himself out and letting Mayweather come after him when his tired.

I actually believe Pacquiao will rock Mayweather at least once into the ropes  and another time onto the canvas during the early to mid-rounds (3-5), but Mayweather is going to use his flurries to snag some rounds late. I also predict at one point perhaps round 7 or 8, Pacquiao will leave his face open and catch a hard right cross from Mayweather that wobbles him too, possibly having to go down to a knee to catch a few seconds for Pacquiao to clear his head. This fight is going all 12 rounds and even the last round Mayweather will jab and dodge from a slugfest, it’s his defensive trademark.

It will be a  very controversial split decision as well. Most of the fans watching on television will come away believing Pacquiao was the victor, but the judges will give the nod to Mayweather who will retire with an unblemished record crowing about how he is the best ever. Also, most people will come away believing they did not get their money’s worth.

For the predictions of my fellow OTBR teammates see below.

Robert Moreno: if Pacquiao can get to Mayweather early he could knock him out for the win, but Mayweather will survive the early storm and win by decision.

Joel Goldschmidt: Pacquiao finds a way to earn a technical knockout over Mayweather in the 9th.

Mike Jacobs: Pacquiao by an 11th round KO.

Ash Boodel: Pac-man (Pacquiao) knocks out Money Mayweather cold in the 2nd round.