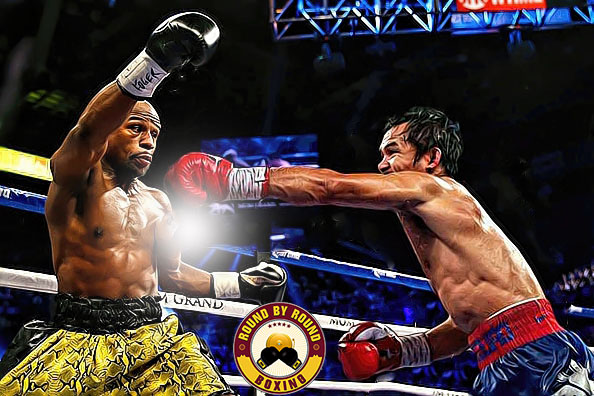 The top image is (Courtesy of Round by Round boxing) You have read about Manny, now it is time to give Floyd Mayweather Jr. his recognition and story.

Floyd is a right-handed prize fighter with an orthodox stance. What is Orthodox you ask? It is a way of positioning both the feet and hands in combat sports like Boxing and Martial arts. A traditional orthodox stance is one in which the boxer places his left foot and left should further in front of the right foot, thus having his weaker side closer to the opponent, while the stronger right hand is back in a guard position to protect the sweet spot on the side of the chin . As it favors the stronger, dominant hand  the orthodox style is the most common stance in boxing. Thus, it is mostly used by righties. Generally, a southpaw is the mirror opposite of an orthodox right-hander.

He is a 38 year old from Grand Rapids, Michigan.  Floyd has his fan base, but he also has his ‘haters’, because like sports dynasties he always wins. Regardless, he draws so many eyes to the screen to witness his performances in the ring.

Floyd has his share of nicknames too: Pretty Boy, Money, and TBE, which stands for [The Best Ever]. He is undefeated in his professional career at 47-0. That’s right zip, zero, not one single blemish on his record. 26 of those victories were by knockout so Mr. Mayweather Jr. has more pop in those gloves than he is reputed to have.

Although Mayweather has slipped a couple times, and got hurt once or twice onto the ropes and almost knocked down by Zab Judah, he still hasn’t ever truly WHIFFED the canvas. Seriously, that’s remarkable, even Muhammad Ali was put on the canvas a couple times.

The force is strong in Floyd, as his father Floyd Sr., and his uncles, Jeff and Roger, all have it and they were all fine fighters, who each won a professional championship. Yet, along with his talented, accomplished relatives, and their defensive style, Floyd’s showmanship side reminds me of the Great Sugar Rays (Both Robinson and Leonard). Cinematically, he is the unbeatable, Achilles from Troy, powerful, over-confident, and looking to stamp his greatness on the earth with Apollo Creed spice for the fancy ways he enters the ring in big fights.

While Floyd’s father and uncles were successful prize fighters, Floyd Jr. did not grow up with a silver spoon or get a Ferrari on his 16th birthday.  Rather, he grew up in New Jersey in a one bedroom place, with Floyd as one of 7 people in this place. He also spent many years growing up in Grand Rapids. His mother struggled with Heroine addiction. Floyd, went through an oven of hell just like Manny. His relationship with his father has been bumpy and off and on. Floyd Jr. has been quoted as saying the following about the relationship with his father as this . “I don’t remember him ever taking me anywhere or doing anything that a father would do with a son, going to the park or to the movies or to get ice cream”, he says. “I always thought that he liked his daughter (Floyd’s older stepsister) better than he liked me because she never got whippings and I got whippings all the time”. Floyd Sr. also after his boxing career got into the drug hustle game and was incarcerated for a time, also negatively impacting Floyd Jr.

In the 1996 Olympics, Floyd Jr. lost a controversial decision to Serafim Todorov, in the semifinals, and from what I have researched, he has a reason to disagree with the judge’s decision. He went on to take the Bronze medal. It is possible that his only true legitimate loss came during the Olympic trials at the hands of Augie Sanchez ( a dude who was said to throw some real missiles in those fists), barely (11-12 on points). However, during the trials they had 2 rematches and Floyd Jr. redeemed himself with dominating performances that averaged 19-11 scores. Some people mistakenly theorize that Floyd Jr. hasn’t beaten too many fighters in their prime. I heard Skip Bayless of EPSN recently claim that Floyd Jr. has mostly defeated tomato cans. I fully disagree.  Floyd Mayweather Jr. has beaten most of the same great fighters that Manny Pacquiao has. Here are a few examples of the many he has licked: In 2000, the 23 yr old Mayweather tangled with the stone handed super-featherweight champion Diego Corrales (33–0, with 27 KOs). Neither had ever sniffed the floor before. Both fighters were the same age (23), yet Corrales had many physical advantages over Mayweather: two inches in height, an inch in reach and weight, Mayweather won every round and knocked down Corrales five times (three times in round 7 and twice in round 10). After the fifth knockdown, Corrales’ cornermen climbed the rope and stopped the disaster.

Then in 2003, Mayweather defended his WBC lightweight title in a unanimous decision over the Dmoniican Victoriano Sosa, fought with technical precision brilliantly over 12 full rounds. Mayweather then took on WBC #1-ranked contender Phillip N’Dou of South Africa, whose record was 31–1 with 30 KOs and promptly triggered endless straight rights and lefts until he floored N-Dou in the 7th.

In 2005, Floyd Mayweather Jr. entered the Atlantic city backyard of Arturo Gatti and pummelled him until it was stopped in 6 rounds. Check out his extravagant entrance. (Courtesy of F***the UG Channel)

Then, in 2006 in a unanimous decision he took the IBF belt from the aggressive Zab Judah, who actually ROCKED Mayweather once early on with a sharp right hook, Floyd used his glove to keep from falling as that almost sent Mayweather to the canvas and had Judah pressed for a combination he might have had the chance to knock Mayweather out, but from round 4 on, Mayweather owned the ring and pounded Judah’s face relentlessly. In 2007, he scored a split decision victory over Oscar De La Hoya (34 years old and not as much in his prime anymore). I remember this fight and I did not agree with the judges or compubox’s statistic on punches landed etc. I felt Oscar landed more than given credit. I actually felt this fight was a draw because Mayweather allowed Oscar to push the pace so much. Although, many experts felt Floyd Jr.’s defense was so good that he should have had a unanimous decision. Boxing is funny like that, different eyes see different things.

Before you read on check out this video of some his defensive prowess. Hooks especially rarely come close to connecting on him.  (courtesy of jhn01man)

Next he knocked out the undefeated Ricky Hatton in the 10th. In 2009, he thoroughly dominated 12 rounds against Juan Manuel Marquez. Marquez was said to only land 12 percent of punches and jabs thrown. I did not see it so I cannot dispute it.

In 2011, he secured a unanimous 12 round decision over Migeul Cotto. Then in 2013, he baffled and hammered the fine fighter Canelo Alvarez. In 2014, Floyd Jr. garnered back to back victories against Marcos Maidana in fights that went the distance, but weren’t that close.

To enjoy more of his handiwork and see some of his offense over the years, take a look at this career highlight video of Mayweather that really gets going about 2 minutes in and then it is just one performance of craft, and ‘sheer invisible quicks’ that overcome his opponents again and again.  (Video is courtesy of Brand21productions)