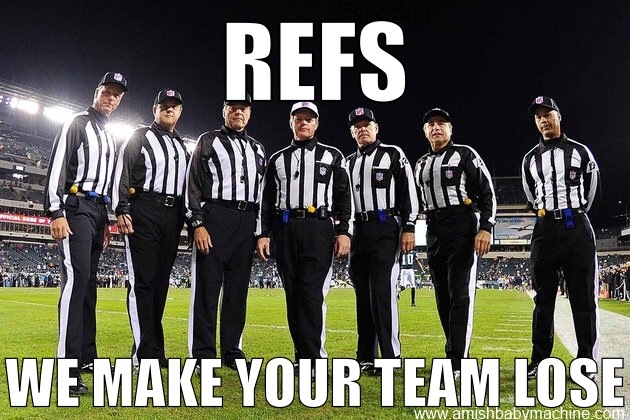 Historically, there are a couple sports who are the one’s that consistently carry the reputation for rotten work by the referees and call into question the integrity of the outcome: Boxing and professional basketball’s NBA. They are the dynasties, the Yankees if you will.

Here at OTBR we are going to chart through the year the performance of major sports in the world (mostly North American for now) to see who will win the 2015 brass whistle for poor officiating. Yours truly will be the final prosecutor, judge, and —JURY!

While the season was mostly officiated well, the egg was laid in the men’s basketball tournament by the officials or Zebras as the late great Marquette coach and announcer Al McGuire used to call them. Excellent pieces of evidence: SMU was robbed in the 1st round against UCLA by a Phantom goal tending call. I was rooting for UCLA, but that shot was not even close to going in. West Virginia was permitted to play hockey during their full court press against Maryland and subsequently, Maryland’s star guard Melo Trimble was taken out of the game for his safety in the Sweet Sixteen. During the Final Four, several atrocious calls against Wisconsin versus Kentucky, and in turn Kentucky was hosed on a huge call late.  C’mon with replay and the technology and the big screens we have in either the bar or at home, we know when terrible calls are made. Finally in the 2nd half of the title game, Wisconsin was robbed multiple times by poor calls against Duke. Yes, bad calls can affect an outcome and this year proved they had an impact on final results. It makes people wonder are the refs’ that incompetent or are certain results desired and massaged? It also robs thunder from the great players and coaches by scarring what should just be amazing play. NCAA basketball you are in the clubhouse with a great chance to retain the title as you top the leaderboard

Since most sports are yet to have their season we will have to use past performances to give them a current place on the chart.

Had we given this award away last year Roger Goodell, the NFL Commissioner and his league might have earned the brass whistle. The Lions were ripped off in Dallas in the playoffs. In the second round at Green Bay, then it was Dallas’s turn to get the screw job on the Bryant catch in front of the endzone. Those were the two worst examples, but instead, the league is concerned about something bogus like deflated footballs that their referees approved! Another season like that and they could surge to the top.

How many times have we heard rumors, the fight was fixed? Dude took a dive? How many times have we watched a big fight and didn’t even remotely agree with the judge’s decision? Thus, boxing is number three and with the huge fight between Mayweather and Pacquiao approaching this year holds hope for Boxing to earn yet another title of poor officiating champ and a brass whistle.

David Stern, the retired commissioner from the NBA, where he led the league from 1984 to February of 2014, must be a bit concerned. Let’s remember he is credited for raising the popularity of the league during his leadership as much as the game’s biggest names: Bird, Magic, Jordan, Kareem, Isaiah, Shaq, Kobe, Dirk, and Lebron. Everyone has heard the legend of the frozen envelope so the big market New York Knicks could get Ewing in the 1985 Draft Lottery.

If you haven’t heard of it,  check out the video below.

The video for me is inconclusive, but if it’s really a frozen envelope, it’s clever. Now we have all known that in big games and especially in the playoffs, big market teams and superstars usually get the benefit of the doubt on calls. I think this year’s post-season ought to give the NBA a chance at climbing the ranks, but we will see.

No one else is currently in the power rankings, but it’s going to be a long season so other sports could make a run at the brass whistle.

In conclusion, I have to tell you I do think sometimes, during the speed of these games and amazing athletes and split seconds to make a choice, sometimes it is legitimately a mistake or a bad angle. Sometimes, I think it is just down right incompetence, but let’s not kid ourselves, Billion$ of dollars are at stake with these sports now. That makes it hard to believe that calls are never ever swayed in favor of  a certain team to increase their chance of winning. Yes, Refs’ can make your team lose! If you don’t agree with me, go ahead and make some comments below. I’m happy to continue the discussion.