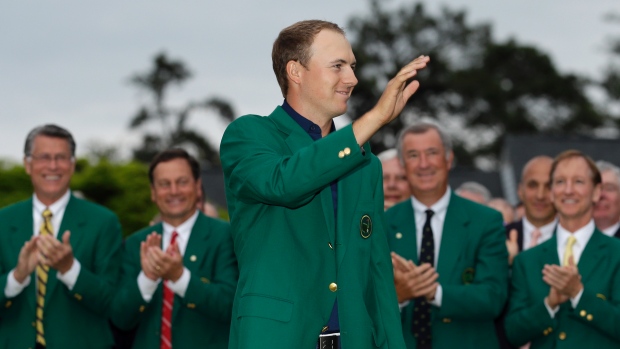 ( Above Image courtesy of The Canadian Press)

Let’s talk about some good vibes right now in sports. What is breathing life into them? After all, we can’t always have the same old ratty story lines play out.

On the PGA, 21 year old Jordan Speith’s magical run last weekend at the Master’s could signal a new big name to go with the awesome young talent in Rory Mcilroy (25 yrs old), already a winner of 3 majors at such a young age [Only Jack Nicklaus and Tiger Woods] have accomplished such at the same tender age. Speith gives us a new American onto the seen, as Tiger (39 yrs old) and Phil Mickelson (44 yrs old), are in the latter stages of their primes. Rory, who hails from Northern Ireland gives the Europeans a big dog in the hunt. Also we know these dudes (Rory and Jordan) have a charisma about them just like Tiger and Phil, with GQ looks. The Sport is getting the new generation it sorely needs. Men’s Golf fans you are going to be fine.

In the Women’s circuit of pro golf, again golf fans, you’re in good shape. Michelle Wie (25 yrs old) and Lexi Thompson (20 yrs old) have each competed in majors and both of them last year earned their first LPGA major championship. Like Rory and Jordan, these youngsters have the charm and looks to grace magazine covers. In today’s world of sports and the way dollars from sponsors are tied in yes, the looks help. Both are Americans, but since Wie’s parents are from South Korea, you know South Korea as well as America will proudly claim Michelle. It’s been a while since hall of fame legends like Nancy Lopez (American, 3 time major winner) and Anika Sorenstam (Swedan. 10 time major winner) graced the greens, dominating women’s professional golf. The new generation which features Michelle and Lexi and others will carry the game from here.

How about baseball’s big leagues? The Chicago Cubs are in first in the National League central and could be back in contention all year.  The Colorado Rockies are also in first in the west division. I know it’s a long season, but the new blood is a nice start.

The Yankees are in last in the AL east and the Mets are in first in the NL east. This is a terrific switch. Yes, the game actually needs the Yankees to miss the post-season for a few years, but we all know they will make some big trades and get back in the hunt. The Mets have been out of the action for a while and their fans are starved for some October baseball. Stay tuned to see if the Mets have what it takes. The last year the Yankees had a losing season was 1992, when they went 76-86 and be still my aching heart they finished in 4th place.

For those who say, uh but New York is the nation’s # 1 television market, and baseball needs it, I say that’s why we need the Mets in contention and not the Yankees. The Mets have put a stinky loser product on the field for six seasons straight and haven’t played autumn ball since 2006. Baseball needs the Mets instead.