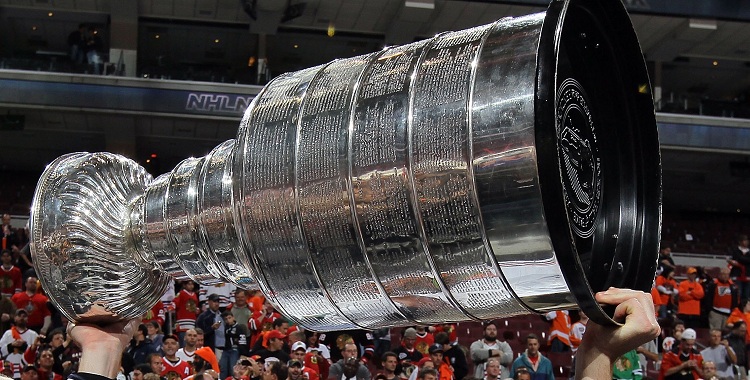 Rejoice hockey fans; the real season is about to begin. The NHL playoffs: where no one is surprised if the President’s Trophy winner goes down in the first round, overtimes can go into tomorrow and broken ribs are officially listed as “upper body injuries.” It might be the most unpredictable playoffs in any sport, but one thing is for sure, there will not be a repeat Cup winner as the Los Angeles Kings failed to make the playoffs coming off of their amazing run last year. So, who will be this year’s Kings? Well, I have no idea, but I’m quite sure it will be one of the teams listed below. Here is a look at the first round matchups around the league starting with the Eastern Conference.

This is a rematch of a second round series last year when the Rangers skated past the Penguins on their way to the Stanley Cup Finals. This year has a much different feel as the Rangers earned 113 points and the Presidents Trophy while the Penguins needed to win game 82 to sneak into the playoffs and counteract a near disastrous finish to the season. The stars are out in this series with Lundqvist, Nash, Malkin, Crosby to name a few. If Pittsburgh is to steal this series, it will be a result of Crosby and Malkin taking over. They are depleted on the blue line and Marc-Andre Fleury has never been the model for consistency. The Rangers boast a deep team, better goaltending and a resurgent Rick Nash, who scored a career high 42 goals this season.

My Pick: Rangers in 6. When in doubt, take the team with the better goalie and Lundqvist is certainly that. The Rangers offense is good enough to carry them deep in the playoffs and a healthy Lundqvist can take them the rest of the way

Congratulations Montreal! You won the Atlantic Division and earned the most regular season points since 1989 when they were lead by Chris Chelios and Patrick Roy. Your reward? You get to face the hottest team in hockey. The Senators enter the playoffs on a 21-3-3 run to catapulted them up the standing and into one of the two Wild Card berths. Oh, by the way, the Senators were also the team that upset Montreal two years ago in the first round. Combine that with the Canada vs Canada aspect and you are looking at the most interesting first round matchup. This series is all about goaltending with Montreal’s Carey Price having his best season ever and likely will take home multiple awards for his season. On the other end of the ice, you have the Hamburgler, Andrew Hammond, who has gone 20-1-2 since taking over the reigns as the starter in Ottawa.  That is pretty spectacular.

My pick: Montreal in 7. Something has to give and one of these amazing goaltenders will go home too early, but Price is on to something special this year and the Habs skaters are a notch above their counterparts, so I’m going with the Canadiens here.

Detroit is making its 24th consecutive trip to the postseason, which is amazing in itself, but what will come of it. The Wings have the names that you’ve come accustomed to hearing this time of year. Datsuk, Zetterberg, Kronwall. But they are going against a young, uber-talented squad in Tampa Bay that will give them a run for their money. Steven Stamkos might be the most talented player in the league and his 43 goals this season proves it. Put him on a line with Ondrej Palat and Nikita Kucherov and the Lightning will be hard to slow down. The Red Wings have concerns with depth on the blue line and they don’t even have an obvious starter in goal for Game 1. This looks to be a high scoring series that has been dubbed the Yzerman Bowl since Steve Yzerman’s legendary career in Detroit collides with the team he has built in Tampa as the team’s GM.

My Pick: Tampa Bay in 5. Too much youth and scoring in Tampa and Detroit won’t be able to keep up.

I probably should have just listed this series as Ovechkin vs Tavares. Ovechkin lead the league in goals for what feels like the 27th straight season and Tavares had improved each season since the Islanders made him the first pick in the 2009 draft.   All eyes will be on those two when they are on the ice, and rightfully so. In net, both teams relied heavily on their starters, giving them little rest throughout the season leading to questions as to how much they each have left in the tank. Both Jaroslav Halak and Braden Holtby had the best seasons of their careers and even set a few team records along the way. While it’s easy to get blinded by the Ovechkin/Tavares matchup, the reality is that most hockey series’ come down to goaltending, and the Caps have the edge there.

My Pick: Capitals in 6. Washington is more balanced and rely less on Ovechkin than the Islanders do on Tavares. Holtby will hold up a bit better than Halak and the Caps will advance.

This series has a mixture of same old-same old (Anaheim winning the Pacific Divison for the third straight year) and new blood (Winnipeg making the playoffs for the first time since moving from Atlanta). The Jets will lean on goalie Ondrej Pavelec and scorers Dustin Byfuglien and Andrew Ladd in an attempt to unseat the best team in the Western Conference. The Ducks made a big move in the offseason when they brought over Ryan Kesler to add another top shelf forward to pair with Ryan Getzlaf. The Ducks have been here before and are primed for a deep run.  Young net minder Frederik Andersen is primed for stardom in Southern California.

My Pick: Ducks in 5. As crazy as it is going to be when the series goes to Winnipeg for the first time since 1996, the Ducks are too strong. Can’t pick against them. 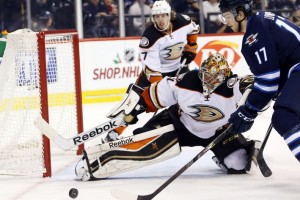 Another all Canada series! The Flames surprised everyone this season by making the playoffs when most expected them to be near the bottom of the standings. Vet Jiri Hudler lead the team back to the playoffs with career highs in goals, assists, points, plus/minus and pretty much every other statistic they keep. Goalie Jonas Hiller has been in this position in the past when he lead the Ducks to the Cup and the Flames will need his experience if they are going to get by the Canucks. They are lead by the Sedin twins (who doesn’t like Swedish twins?) and Radim Vrbata’s team high 31 goals. Goalie Ryan Miller finally gets to play in meaningful hockey games outside of the Olympics.

My Pick: Vancouver in 7. Should be a close series with high energy play, but the Canucks are a little better, a little more tested and ready for prime time in Canada.

The Wild’s season was turned around when they basically stole Devan Dubnyk from the Coyotes early in the season and he solidified the goaltender position in Minnesota. On the other side, the Blues are in a trickier spot when opening night starter Brian Elliot couldn’t hold the job over the course of the season and eventually gave it up to Jake Allen. The Wild look to build on the playoff success of last season when they upset the Colorado Avalanche in the first round and will need Dubnyk to be the leader. Zach Parise was the hero in that series against the Avs and followed it up with team highs in goals and points. In St. Louis, they are relatively healthy and deep. They have nine double digit goal scorers and nine players with 44 or more points. They will need to have multiple lines contributing each game if the playoffs prove to be too much for Allen to handle.

My Pick: Minnesota in 7. This is a close one but I like the Wild to repeat what they did last year and Dubnyk will steal at least one game in the series and that will be the difference.

Will Patrick Kane play or not? That is the big question for the Blackhawks when they lost their best player to a clavicle injury during the regular season. Initially it was thought he wouldn’t return until the second or third round, but now they are thinking he might be able to play at some point in this series. Both teams have had their upswings during the season, but both come in on a downswing. The Hawks have lost their last four games heading into the playoffs and the Predators are in a 6-12-3 stretch. Not the time to be playing your worst hockey.   Both teams have solid goaltending, but Corey Crawford of Chicago has played well regardless of how well the team played in front of him, while Pekka Rinne of Nashville struggled mightily to finish the season when the Predators were playing their worst. Someone has to win this series…

My Pick: Blackhawks in 6. The Hawks have enough in the tank to out-work the Predators in this series and make it to the Western Conference semis. If they get there with a healthy Kane, look out.