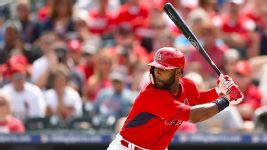 The last two seasons in the NL Central, we have seen the same basic story line. The Cardinals lean on experience, solid fundamentals and a well-built roster to lead them to the Central division crown while the Pirates rely on youth, potential and athleticism to earn back-to-back Wild Card berths. Will this be the year Pittsburgh gets over the hump to dethrone the Cards? Will a new contender emerge in Chicago behind the free agent star Jon Lester and a slew of elite prospects? Is there hope in Cincinnati or Milwaukee to contend? Top to bottom, this might be the best division in the National league, so let’s make one last stop in the National League and preview the Central Division.

I’ve been a big fan of Jason Heyward since he broke into the league with Atlanta in 2010 and it seems like he has been on the verge of breaking out ever since. Fitting in the seconds spot in the lineup will go a long way when he gets to hit behind Matt Carpenter and in front of the power of Holliday, Adams and Molina. Moving Shelby Miller for Heyward was a great move since Miller would be competing for a spot in the rotation, while Heyward will be an instant impact guy in the field and at the plate. Molina has been the heart and soul of the Cards for years and they will rely heavily on him both with the bat in the middle of the lineup and managing the pitching staff. Young guys like Kolten Wong and Jon Jay hitting in the 7th and 8th spots in the lineup will give the opposing pitchers headaches with no easy outs in the lineup. The bench is one of the best as they boast a few guys that would start on other teams around the league. Randal Grichuk, Peter Bourjos, Mark Reynolds and Pete Kozma are all solid options off the bench and are poised to fill in should a regular starter go down from injury. The rotation is strong and is one of the best out there. Adam Wainwright is an ace and, though his elbow surgery in the offseason is a bit of a concern, should be the same Wainwright from seasons past. Lynn is young and seems to be improving with each season he spends in the big leagues. But the pitcher you will want to keep an eye on is Michael Wacha, who has the best “stuff” in the rotation and is finally healthy. If he can stay healthy this season, look out. The pen is yet another strength with flame throwing closer Trevor Rosenthal and set up guy Jordan Walden. Coach Mike Matheny even has a few left-handed relieves he can depend on late in the games to give that group a nice balance.

Bold Prediction – Wacha stays health and inserts himself into the Cy Young conversation while Heyward does the same for the MVP race.

The Pirates have a very strong lineup and can be even better if the young studs are able to continue improving. Harrison was a break out star last year and will need to be a catalyst at the top of the lineup. McCutchen is easily one of the ten best players in the league, and even that may be an insult to his skills and credentials. If Pittsburgh is going to overtake St. Louis, it will be because Polanco and Marte realized their full potential. They have the skills, now we just need to see them become the well-rounded players they want to be. The Pirates had mercy on Pedro Alvarez by moving him to first base permanently where they can enjoy his power bat without watching him throw the ball from third base into the stands behind first.

Yikes.  As I said before, Cole is on the verge of being one of the best in the league and they will need him to be that guy. Liriano is a solid member of the rotation but I would worry about the rotation past that. Burnett is old and has definitely shown signs of deteriorating. Morton and Worley could be very good, but you just don’t know exactly what you are going to get out of them. The bullpen lacks the star power, but has been very effective. Melancon has been stellar the last two seasons posting ERAs of 1.39 and 1.90 and they will need him to repeat those performances. In the end, I would not be surprised at all to see them take the division, but a third Wild Card berth is the most likely outcome.

That lineup could produce anything. First of all, I’m going to ignore Theo Epstein’s recent comments of Kris Bryant not being ready for the majors because that is ridiculous. He has hit the cover off the ball in spring training and dominated every level of play he’s been at. Even if he isn’t the starter on opening day, it won’t take long before the number one prospect in baseball is a superstar in Chicago. Bringing in Dexter Fowler could pay off big time if he can regain some of the success he had in Colorado and would be huge in setting the table for Castro, Rizzo and Soler. Miguel Montero was a nice under the radar move to shore up the catching position. Soler tore it up in limited action in the majors last year and will be a beast in the middle of that lineup. Javier Baez struggled in his audition, but he is only 22 and has plenty of room to develop. There is a good chance he will start the season in the minors, letting Arismendy Alcantara take the reigns until he is ready. The rotation isn’t flashy behind Lester, but Arrieta had a real nice season last year that he will look to build on. The same can be said for the bullpen lacking depth behind Rondon who had a nice season last year, saving 29 out of 33 chances. The pitching is definitely not a strength, but the offense might be able to bail them out. In the end, there are dozens of question marks surrounding the 2015 Chicago Cubs, but there is no doubt that Joe Maddon’s team will be fun to watch. 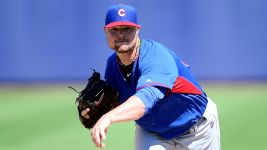 Their season, and the next few seasons’ success, might hinge on Hamilton. He is the fastest guy in the league, but struggles to get on base. There is nothing better than a leadoff hitter who can disrupt a pitcher and steal a base, but you can’t do that from the dugout. If Hamilton can learn how to get on base, Votto and Phillips will be huge beneficiaries as they will be able to hit with a runner in scoring position often. Staying healthy will be key for those two as Votto missed 100 games last year and Phillips missed 41. Jay Bruce is pure power and hopes to bounce back from a down year. What to do with Johnny Cueto is another question. An undeniable ace, he is a free agent after the season, so if the Reds find themselves out of contention in July, look for them to deal him and reload their farm system. Homer Baily is banged up at the moment, but should be back in April some time. No one throws harder than Chapman and the bullpen in general is a bit of a weakness. The Reds will have to rely on the stars on the roster all season if they want to contend; otherwise a fire sale is looking pretty likely.

Bold Prediction – Votto regains his MVP caliber form and hits about .300, with at least 25 home runs

The Brewers had the 6th best offense last season and that was without Ryan Braun at 100% for most of the year. This could be an excellent offense if he (and others) stay on the field. Lucroy is one of the best catchers in the league and Gomez is a supremely talented young talent. Apart from having one of the best names in the league, Scooter Gennett showed potential in his rookie season and will build on that now that Rickie Weeks won’t be taking his at bats. The rotation is going to be the Brewers downfall. They lack a true ace and have loaded up with middle of the rotation type guys. That is going to be a problem in a division with Wainwright, Cole, Cueto and Lester. The bullpen was outstanding last year and they bring back Francisco Rodriguez to close and former closer Jonathan Broxton to be his set up. This group will be their strength, now the trick will be to get the ball into their hands with a lead.