As we get ever closer to the NHL Playoffs, the battle for the final few playoffs spots heats up.  Depending on the schedule, teams have between eight and ten games remaining, so they can basically be counted as playoffs games for teams like Washington, Ottawa, Boston, Florida, Minnesota, Winnipeg, Los Angeles, Dallas and Colorado.  Those are the teams with the best chance to sneak into the postseason as one of the two Wild Card winners in each conference.  In the East, Washington has the edge with 88 points and 9 games to play while Ottawa has 85 points and a one point lead over Boston for the last spot.  If these results hold, you can look directly at the last stretch of games for the Senators and Bruins.  Ottawa has won seven in a row and 10 of the last 11 while the Bruins have dropped their last five.  The morning of March 15th saw the Bruins with a 9 point lead over the Senators and primed to go to the playoffs, but that was all erased in just over a week.  The two teams don’t play again in the regular season, so the Bruins will need to turn their fortunes around and hope the Senators falter if they plan on continuing a run of consecutive playoff appearances that stretches back to 2007.

Speaking of the Senators, the main force behind their current hot streak is the Hamburglar, Andrew Hammond.  Hammond is an amazing story who took over as the starting goaltender for Ottawa when starting goalie Craig Anderson went down with a hand injury, then backup net-minder Robin Lehner got hurt in the middle of a game against Carolina.  A late bloomer at 27, he is making the most of his first opportunity as a starter going 14-0-1 in his first 15 starts, setting an NHL record for best start in a career.  As mentioned above, his play has brought the Senators from the outside of the playoffs looking in to being penciled in to that last Wild Card spot.  He is becoming a sensation around the league with his play and creative nickname.  It all started after a win against the Philadelphia Flyers when a fan tossed a hamburger on the ice.  Fans have taken that and ran, showing up in Hambuglar masks, more food tossing and McDonalds has even offered him up free hamburgers for life.  I’d use that sparingly if you want to keep fitting your hockey gear, Andrew!

What is going on in San Jose?  The Sharks have always been a team that disappoints when the playoffs start, but it has been a while since they have been this disappointing during the regular season.  The 2002-2003 season was the last time the Sharks failed to make the playoffs which gives them the second longest playoff streak in the league behind the Red Wings’ ridiculous 23 (soon to be 24) straight playoff berths.  This offseason will be interesting in Silicon Valley as tensions between superstar Joe Thornton and GM Doug Wilson have been high with Thornton telling Wilson to “shut his mouth.”  Thornton has 2 more years at $6.75 million per season left on his contract that includes a no-trade clause.  He has not been wanting to use it in the past, but he might just waive it if it gives him a chance to move on to a team with a chance at the Cup.  The Sharks might be looking for a full rebuild in the offseason, something that most in the hockey world thought would happen last offseason.  Instead, they tinkered with the roster, keeping most of the star power they already had.  What will Wilson do if and when their playoff streak ends and the players start to turn on him?  Better yet, is this finally it for Wilson’s time in San Jose?  There is a good chance coach Todd McLellan will be shown the door after the season, so why not the GM Wilson? 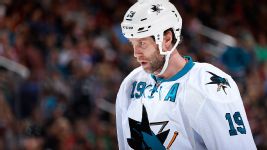