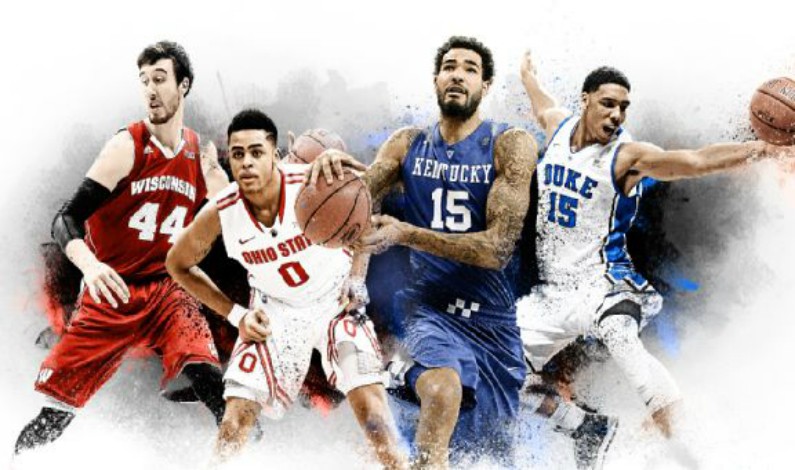 Obviously, the 2015 NCAA tournament has been riveting, well unless you are a fan of Iowa State, Baylor, Villanova, Virginia or a losing patience with Coach Crean, Indiana fan.  You have my condolences.

With 16 schools left still with a chance at glory, who has a real shot for a ‘shining moment’, other than the unbelievable, unbeatable, and utterly unstoppable Kentucky Wildcats?

However, before I answer that, let’s dispense of those who are just fortunate to get this far first and very unlikely to advance. UCLA, Xavier, and West Virginia.

Xavier will face Arizona and there is no way Arizona loses. Both play hard and have heart, but Arizona is more talented.  A young UCLA team has been coached up down the stretch and improved and survived the first round on a controversial call going their way at the end with the goal tending call on a shot that was NOT going in the basket. They were better than UAB, but Gonzaga will exact revenge for 2006 as they are the better team this time.  West Virginia got away with some flagrant fouls on Maryland somehow all of the referees missed them, and Maryland’s best player was injured in the process and kept out of the game for his own safety.

Sure West Virginia is well coached, plays physical and has a nasty full court press, but Kentucky can match the toughness and they actually have faced full-court presses during the year: North Carolina, Louisville, and Arkansas. UK will not panic, they will simply break the press by heaving touchdown passes for highlight dunks to their big guys right over top of West Virginia, and wide open threes on the break more often then they will turn it over. Kentucky wins by 8-11 points or more and advances.

Now, who can beat Kentucky? Notre Dame (Irish have in my opinion the very best player of any position, 6 ft. 5 in senior point guard Jerian Grant) and Wichita State have offensive firepower, if they make shots in an endless 40 minute binge, while Kentucky for some reason plays lethargic then they might pull off an upset, but neither has enough size in the frontcourt or defensive juice to stop Kentucky’s powerful offense. Not gonna happen for Notre Dame or Wichita State.

North Carolina played UK tough earlier in the year and they have depth of talent and size, with a hall of fame coach, so they would relish a second shot at UK, but their starting center Kennedy Meeks who is 6 ft. 9 in and 280 pounds of might has a sore knee and is unlikely to play against Wisconsin. UNC is unlikely to advance, but Wisconsin played Kentucky tough last year in the Final Four, so their offensive style with five dudes who can drive to the rack, dish it, or torch the nets for buckets from anywhere, especially tripleville gives them a small chance.

Arizona has potential: talent, size, freakish athletes, and a great coach, but in the Elite Eight they will face either Wisconsin or UNC and Kentucky would only have to face one of these contenders from the brutal West region in the Final Four.

Out of the East region, 4 good, solid teams remain (Michigan St., Oklahoma, Louisville, and North Carolina St), while all of them have accomplished coaches, especially all-time greats Tom Izzo and Rick Pitino. None of them can realistically beat Kentucky and would only be able to garner a 7-10 point hard fought heartbreaker on their best night or a 20 point blowout if Kentucky gets blue fire HOT.

Utah is a strong squad with one of the best point guards in the nation, Delon Wright, it’s a banner year for this Pac-12 school which is back in contention, but the road ends for them in Houston as Duke will overpower them. Too much Coach K’ genius and juggernaut play from Okafor in the paint.

Gonzaga and Duke will face off in the Elite Eight. That will be a tremendous match-up. Is Gonzaga ready to square off against the big boys with it all riding on the line? Yes, they are more athletic and talented than people realize. Wesley is a USC transfer and a stud in the backcourt who can play defense and race through a crease in the lane to create a layup or setup a big man for an easy deuce. Wiltjer is a former blue chip recruit from Kentucky who is the best of a loaded lineup for Gonzaga that also features Pangos at the point and two athletic bruisers in the paint, Karnowski and Sabonis. There is more off the bench too. This will be this year’s most epic duel of the Elite Eight. Two real contenders in an elimination match. Duke will pull it out as their gutty guards Cook and Jones make clutch plays in every big game.

In the end, two of the game’s most awesome historical programs will be left standing in the dust as I originally predicted for the national title, Duke and Kentucky. The Success of both programs has drawn a lot of jealousy and hatred, but the ratings will be incredible.  The famous, ultra clutch, Christian Laettner shot to stomp on Kentucky’s hearts, will be shown over and over again for the pre-game, to the joy of every Duke fan. (The video below is courtesy of NCAA on demand)

Phenomanal players and past coaches of both schools will be in attendance. We know fans will tune in to root for the team that they hate the least.

I think Duke has a chance, but even Kentucky has a depth of talent and size that Duke cannot bring to the table.  You need to know that Kentucky also has not been given credit for the character and heart and desire they display and equals that of any underdog. UK hustles for loose balls as much as any team. They embrace the challenge to accomplish something special. Kentucky would be at least an eight point favorite and like it or love it, the blue grass faithful will be sporting 40-0 t-shirts, tattoos, hats, and a special new banner in Rupp Arena.

Geesh, 40-0, think about how amazing that is. Other than the Olympics or multiple championships, it’s arguably the greatest single season achievement in North American team sports in college or pro. That’s right 1972 Miami Dolphins, 40-0 is waaaaay better than your pitiful little 17-0. Someone let Mercury Morris and Don Shula know that they aren’t good enough to be on the street that Kentucky will be on with San Francisco, UCLA, and Indiana’s legendary undefeated championship teams.