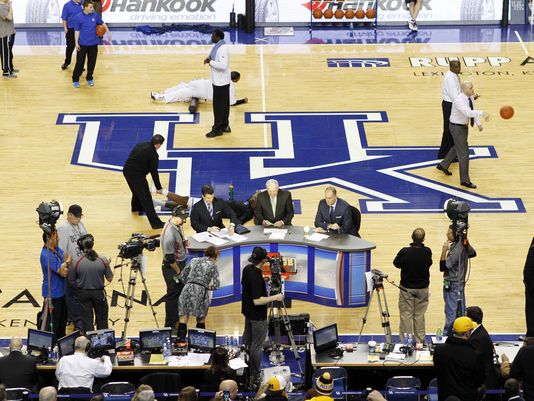 Technically it is still the NCAA tournament, but since the day that John Calipari arrived in Lexington he re-tooled the Kentucky program into the giant blue juggernaut that it has become. Which is much like the greatness historically achieved under coaches Adolph Rupp, Joe B. Hall, Rick Pitino, and Tubby Smith. In 2010 an Elite Eight, in 2011 a Final Four, in 2012 a National Title, last year a surprise runner-up and this year it sure looks like another banner will be going up on the rafters.

Don’t get me wrong. It will be as exciting as any season. There will be some amazing upsets. There always are a few. There are always a few coaches and teams who seem to make a run nearly every year too, such as Tom Izzo, and Rick Pitino. Whether you love the Kentucky Wildcats or can’t stand them, this is a special squad they have on the court. They are 34-0, because Calipari has not just recruited talent, but heart and character. These guys hustle for their teammates and take pride in diving for a loose ball as much as a made basket. As the Coach, John has kept them focused on constantly getting better even though they haven’t lost.

John Calipari is a better coach than given credit he had major success at UMass and Memphis State now in a legendary place like Kentucky he has the tools to dominate. There are very few teams in the top 15 who could beat Kentucky, and only on their best day while UK has their worst game of the year.

I guarantee no one is beating UK this year, not after the sting of losing last year’s title game. Six guys bypassed million dollar paychecks because they want to win a championship before they left and chose to return for this moment. This whole team has embraced the challenge of being great.

This is why I see the Final Four as Kentucky, Arkansas, Michigan State, and Duke. I believe Duke will make a valiant effort against Kentucky, but fall short maybe even in overtime.

I did an article in January discussing whether UK could go undefeated, I thought there was a chance, but I wasn’t sure. At this point I am sure. I have only witnessed two other teams this dominant before the 1990-91 UNLV teams (which won one the National Title in 1990 and went into the Final Four undefeated in 1991) and the 1999 Duke team, who had only 1 loss by 1 point during the season and got upset in the National Title game.

Before you say, oh I see a trend, UCLA and INDIANA had undefeated dominant teams that are as good as anyone remembers back in the 1960’s and 1970’s. I never got to witness those teams, it was before my time. Those teams closed out the season unbeaten and hoisting the trophy. That is the trend I see.

This Kentucky is the best college basketball team I have watched in the last 30 years or so. I have never seen a team that has so much depth of talent. It’s like a college all-star team.  When Kentucky goes 40-0, they will have to be remembered as one of the best teams we have ever seen in college basketball. This second title is going to validate John Calipari as one of the all-time great coaches.