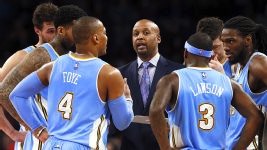 Two seasons removed from winning 57 games under George Karl, the Denver Nuggets missed the playoffs last year and have won only 20 games so far this year. It is all coming to a head as they were in fire sale mode at the trade deadline, which was followed by a report that had the team breaking the huddle with a chant of “1-2-3…6 weeks!” referring to the six weeks remaining in this lost season in Denver. While the players may be counting down the days until they can golf or whatever they do in the offseason, the Nuggets front office appears to not be taking any days off, firing Brian Shaw today, according to ESPN.com’s Ramona Shelburne. Shaw won’t finish his second season in his first stint as a head coach and may struggle to find another head coaching job for a while. Whoever takes over will have their work cut out for themselves with a team struggling to find talent and the curse of being in the much stronger Western Conference. Tough times for Denver fans with the Nuggets and Avalanche currently struggling to stay out of the cellar in their divisions, Peyton Manning is aging at warp speed leaving a very narrow window for a championship and the Rockies, um, attempting to stay healthy? Ouch.