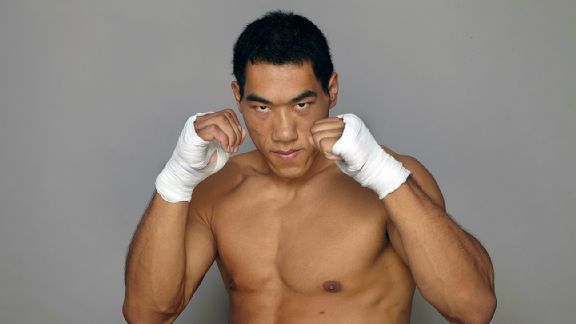 You might remember how in part one I raved about current and up and coming heavyweights who are massive athletes. Meet one who dwarfs them all, Taishan Dong. He is called the Great Wall and stands at an imposing 6ft 11in or 7ft depending on the source, and his weight is in the neighborhood of 280-285 pounds of lean muscle. Taishan appears chiseled out of stone. He also has a sophomoric nickname and I will let you figure that one out.

He was born Jianjun Dong, but when he began a career in kickboxing he decided to go by Taishan. Why the change to Taishan? Because it is a great mountain in China and a dude who is the size of a mountain, needs a fitting name. I have watched him when he was a kickboxer and he moves with more smoothness and ‘athleticism’ for a seven footer than one usually expects. Only today did I find out he had made the move to boxing. You thought I was giddy when I wrote the first article on heavyweights, well now I am through the roof with thought of Taishan’s potential.

What have I learned? He is just 26 years old and is two and zero as a professional against guys who had losing records (Alex Rozman, 2-6 and Tommy Washington, Jr. 3-6) and each was given the 6th loss in their career via a knockout from Taishan, one in the 2nd round and the other in the first. His third professional bout is tonight against another unknown fighter, Roy McCrary, who is 3-2.

This version of the ‘Great Wall’ now lives in Glendale, California now and has signed already with Oscar De La Hoya’s Golden Boy promotions. Oscar is a brilliant business man. Dong already has a budding fan base and even if he only reaches the top ten rankings, it will have been worth the investment. Taishan is trained by the former welterweight and middleweight champion of the world, Buddy Mcgirt.

I looked up some of Taishan Dong’s previous fights and I see a guy with a somewhat orthodox style that is still learning the fundamentals, yet appears to have brutal raw force behind even his left jabs.  In his fight with Alex Rozman the jabs alone were knocking Rozman back and over onto the canvas. In his fight with Tommy Washington it was a right hand cross, but Taishan is so tall that the physics of his right cross and his left jabs coming down seem to have a little extra juice from the gravity.  That could be my wild theory, but the height advantage seems to add more power in those punches. He is also not afraid to abuse his size and literally shove and bully other fighters around the ring.

Taishan ’the Great Wall’ Dong is not ready as I think his defense allows him to take a lot of hits (he leaves his punches out hanging instead of snapping them back into place for defense or to strike again. He also misses on many throws, but the likes of Deontay Wilder could outbox him right now, dip the jab and counter with a wicked overhand. Then again in two and a half or three years with hard work, Tiashan could be in line to claim the heavyweight throne.

Here his Taishan Dong  training with a bit of a highlights versus Alex Rozman and Washington.

And highlights of his left jab smashing Alex Rozman.