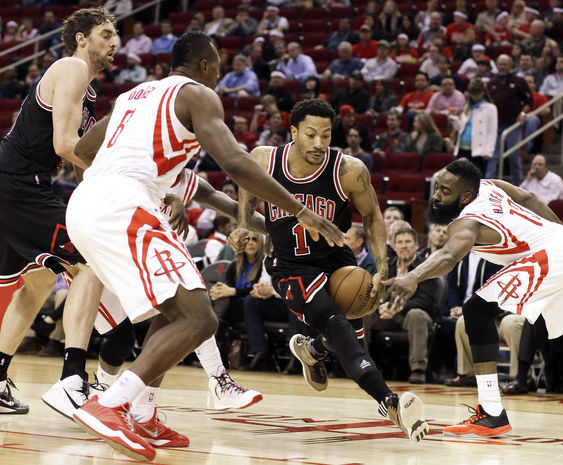 If you have a heart you got to feel for Derrick Rose, the starting point guard for the Chicago Bulls. How many injuries is this poor soul going to endure? Derrick Rose is a former league MVP and only 26 years old, he should be in the prime of his career chasing a ring, and instead Derrick has already injured his knees three times. This time he has a torn medial meniscus in his right knee, and yes he tore this one last year just a few weeks into the season. Rose had just seemed to be getting more comfortable and playing at nearly the level that had brought him an MVP.

Derrick Rose was averaging over 18 ppg and over five apg. Just a few weeks ago on February 2nd he logged over 40 minutes for just the third time this year while leading his teammates to a victory over Lebron’s Cavs, and torching the net for 30 points, while sharing the cookies seven times (assists), along with four rebounds, and one steal.  I don’t think Rose’s body will allow him to achieve the level of play he used too as injuries may never stop for him.

The Chicago Bulls are 36-22 and second in their division. They were a contender for the Eastern Conference crown and a trip to the finals. I think losing Rose knocks their odds down a peg hence the past tense on the previous sentence.

You might have seen my January post regarding the MLB tinkering with rules, especially the pace of the game. I’m not the only one who is less than pleased with the changes. Check out what the future Hall of Famer and three-time World Champion, Boston Red Sox slugger David Ortiz, ‘Big Papi’ has to say.

Yes! Floyd Mayweather and Manny Pacquiao are finally agreeing to a showdown where the Welterweight Championship is on the line, which will be this May 2nd  (Click here to read my Open Letter to Mayweather from January 22). After all these years it is finally going to happen. I am going to pat myself on the back just a tad as if you recall I wrote an impassioned open letter to Mr. Mayweather back in January attempting to inspire him to make this bout happen. Check out this video of the two fighters with highlights from their other fights.