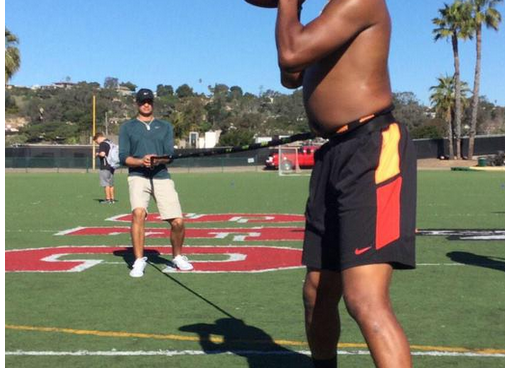 Is anyone else as shocked as I am to see this image? If you had a chance to be the number one quarterback selected in the NFL draft and maybe THE number one overall, wouldn’t you be getting in shape for the combine? The young man in this photo is none other than Jameis Winston, the controversial stand out quarterback of Florida State. When I see this photo I do not see the guy who has been called potentially the next Ben Roethislisberger (due to his style of play and both being big mobile winning QB’s) and potentially the best pro prospect.

I kid you not, it looks like that regular 30 or 40 something dude on the weekend who, while at the park with his buddies, is bragging about the glory days when he was a high school quarterback, while someone on the side has already fired up the grill for some extra juicy burgers. And since those glory days he’s been chugging brewskis, slamming down donuts, pizza, crab legs with extra butter, and makes sure to start his morning off with biscuits and gravy.

Supposedly, this photo was taken in early to mid-January, that’s like only a week and half after the playoff game. Was he in playing shape when Oregon spanked Florida State in the football final four? If he wasn’t in shape then I now understand why he had the off-balance goofy looking fumble in the game that sank their chances of a comeback.

If Winston was in shape, than that’s a swift time for someone so young to pile on the pounds. I am very curious to see what kind of shape he will be in for the combine. If his stock falls, it was because of the beer belly in this pic’.