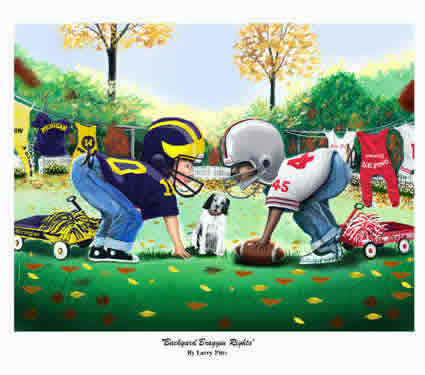 Debatably, Michigan versus Ohio State (-21) is the finest college football rivalry bar none. They have suited up against each other since 1897. Michigan holds the historical edge between the schools at 58-45-6. Definitely, nothing is bigger on the national stage historically speaking. The seeds of this rivalry were really planted in 1835 when the two states had a military confrontation on the border disputing ownership over 468 square miles of land known as the Toledo Strip. Fortunately, only trash talk and warning shots came about and eventually a “compromise” was reached where Ohio held onto the 468 square miles, but Michigan would be granted territory by the president in the upper peninsula to make up for it 1836. Then the Wolverines exacted revenge on the field in 1897 when they pasted a 34 to zilch, spanking on the Buckeyes.

Aside from the two states being next door to one another, time and time again the winner of this storied contest has determined the conference Champion. Nearly every year has effects on major bowl games and national title contention. Ohio State has 34 Big 10 titles, 7 Heisman trophy winners, 7 national titles, and coaching Legends Paul Brown and Woody Hayes. Michigan has 43 Big 10 titles, 3 Heisman winners, 11 national titles and coaching legends, Fielding Yost, and Bo Schembechler (a former Buckeye assistant). To go with all the success these schools feature some of the best uniforms in all of sports. Of course, if you are a true college football fanatic like me than you love all of the huge rivalries. All of these contests are special annual treats that are championships in themselves.

Last season featured a brawl between these foes in which a few players were expelled from further play. The match went down to the wire with OSU escaping with a 42-41 win against UM on an interception in the end zone as Michigan elected to go for a 2 point play at the end, rather than an extra point for overtime. The 2014 matchup features a heavily favored Buckeye squad (-21) on their home field, sporting a 10-1 overall record and a dazzling 7-0 conference record. Michigan stumbles into this game carrying a 5-6 overall record and a 3-4 conference record as big-time underdogs (+21).

What’s at stake? First and foremost, bragging rights against your bitter arch-nemesis. For Coach Urban Meyer and his Buckeye team they have a Big 10 Championship and a potential College football playoff invitation on the line, all they have to do is beat “that team up north”. For Coach Brady Hoke and his Wolverines, it’s the chance to salvage a poor season (by Wolverine standards) and getting the big win against “Ohio”, who has made Michigan miserable of late by taking this match 11 times in the last 13 years, and becoming bowl game eligible in the process. Coach Hoke needs this win in order to have any chance of keeping his job. Although many believe the decision to make a change at the end of the season has already been made. Yet, it’s been 14 years since a Michigan squad has claimed victory in the ‘shoe, so keep that in mind.

OSU’s juggernaut offense is led by their freshman QB, J.T. Barrett, who has completed 65 % of his passes this year for 2,658 yards and 33 scores. He has a lot of talented people to snag those passes: Smith, Thomas, Wilson, and Huereman are perhaps the most reliable. Not only can Barrett toss the leather around, he can scoot too. He‘s danced his way for 849 yards at a 5.4 per carry rate and another 9 tds. The Buckeye coaching staff believes Barrett makes the correct spread option read about 85% of the time. Halfback Ezekiel Elliott is a bowling ball that knocks down defenders like pins and has gained over 1,000 yards this year. This offense is explosive and operates Coach Meyer’s spread by coming at the defense in every way imaginable. They make full use of the field. They go at you wide and up the middle. Barrett will also rip a few darts down field to his speedy receivers for big gains. They can score fast and they can grind you down on long drives. OSU has scored 49 or more points 6 times this year and one of those times was on the vaunted defense of Michigan State on their field.

The Wolverines offense has been the mirror opposite of the Buckeyes this year. They average 20 per game, but in 5 games they only mustered 14 points or less, including nothing against Notre Dame. Senior Quarterback Devin Gardner has thrown for over 1,600 yards and 8 scores. Not exactly the stats of his dreams. The offense runs a mix of pro style and spread, but some believe they should have been focusing on the spread only as in previous years when Gardner had more success. This offense has also had a problem with discipline; they are plagued by penalties and are prone to turning over the ball. They have to bring their A-game on Saturday to have a chance and play out of the spread as much as possible. If they do then they might score 41 points again like last season. Tight End Devin Funchess is Gardner’s best target and plays will need to be called to get him attacking down the seams on OSU. Their running game has been by committee all year and that again makes the spread their best chance on Saturday. Gardner needs to run and Michigan must try to control the clock to keep OSU’s offense off the field.

On special teams Ohio State has Jalin Marshal and Dontre Wilson (highly doubtful fractured foot), who are quite capable of returning kicks for juicy gains. Defensively, OSU is solid and will rely on their best three players to get stops against Michigan’s offense. Bosa leads the Bucks’ with 11.5 sacks, Perry leads the team in tackles with 99 and, Doran Grant is their best defensive back with 3 picks and 7 passes broken up.

The Wolverines don’t have much in regards to their special teams, but place kicker Wile and the Punter Hagerup are statistically sound. That unit just needs to be mistake free. Defensively, Jake Ryan and Joe Bolden are wranglers that rope down ball carriers. They both have over 90 tackles this year. The Wolverines are not great in getting to the Quarterback with a total of 29 sacks, but they will need to bring pressure from various directions to apply pressure on J.T. Barrett to have a chance. They have to use their strength of shooting the gaps and stopping the run to have a chance to contain the Buckeye air raid.

In the two previous games both games have been close. I look for Michigan’s players to come out really fired up. It is widely reported that the team respects and admires Coach Hoke and I believe this will come about on the field especially in the first quarter. The line of scrimmage will be fun to watch early and I expect Michigan to get out in front. Ohio State did not play so inspired against IU last week, but I expect this week will be different. Ohio State knows it needs to trample Michigan in order to increase their chance of getting invited to the NCAA playoffs. I believe just before the end of the half OSU will have claimed the lead by a touchdown. In the second half the Buckeyes will pull away and their relentless scoring machine will put the Wolverines away, but they will struggle to match the point spread. I predict a 44-20 final in favor of Ohio State.