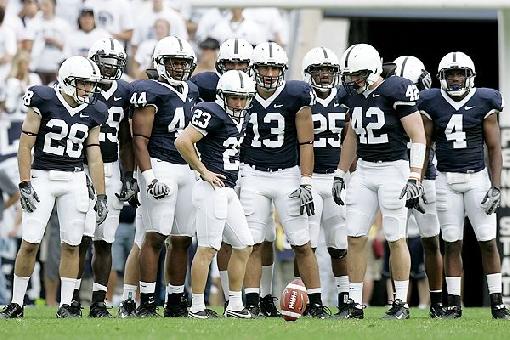 Head Coach James Franklin and the 4-2 Nittany Lions will play host to the 13th-ranked Ohio State Buckeyes (5-1) Saturday night in Happy Valley with about 100,000 navy blue and white clad roaring fan for this Big Ten contest. Normally between these two conference foes, with a game at night so close to Halloween, it might feel like a trip to a haunted house. However, Ohio State comes in as (-14) the scary favorite with a potential to paste a fearsome amount of points on the board.

Coach Urban Meyer’s offense has ripped off four straight games of 50 points or more. Just imagine that, in those four games the least amount of points tacked on was 50. How college football offenses have evolved. The 2014 Bucks are on pace to be the highest scoring team in the school’s history if they keep up the overall pace. Lately the offense has looked like it should be called Meyer’s and Barret’s Touchdown Factory Inc. as they’re pumping out points like Columbus-favorite Cane’s does with fried chicken. If they keep this up, where will they put the extra Buckeye leaf helmet stickers?

When assessing the OSU offense we see quarterback J.T. Barret has thrown for 20 scores and 1,600 yards at a 65 percent completion rate thus far. In some games he connects with as many as eight or nine guys in the air. At this point it is believed by the offensive staff that Barret has also made the right decisions on spread options reads about 85 percent of the time, which makes him quite effective in the run game. Barret just needs to work on his accuracy and timing on his passing to be more consistent and he could be that much better. Freshman Ezekiel Elliot has gashed defenders for 531 yards to move the sticks as he has taken over the starting tailback spot. As a team the Bucks have slammed their way to a 5.4 yard average. Thomas leads a talented, deep receiving corps with 21 catches and 377 yards. Wilson is second with 221 yards. The tight ends Varnett and Huerman are also hulking athletic chess pieces for Meyer’s disposal.

The OSU defense is still okay against the run and could be better as they give up 4.0 yards per attempt. Their flaw in the ground defense is that there are times when they get too aggressive and miss the gap assignments or they leave the edge open. Of course, that aggression has also led to a fair amount of tackles for loss as well. Perry leads the team in tackles with 45. There has been improvement on coverage against the pass and snagging a few passes. The fangs on this defense really are on the D-line, even without the best defensive end, suspended Noah Spence. Some experts believe Joey Bosa is just as amazing as he leads the team with 5.5 sacks and nine tackles for loss. The team has wrestled down the opposing quarterback 16 times and will dial up pressure against PSU’s Hackenburg. This unit is also helping the team win the turnover battle in the last couple of games as they started to get some picks. OSU has capitalized with 105 points off turnovers while the opposition has only garnered 14 points off turnovers. This is a trend Coach Meyer would like to continue.

Urban Meyer’s philosophy of lacing his special teamers with top-notch playmakers is paying off. They average more than 5 yards better than their opponents on both kickoff returns and punt returns. That’s a plus in the battle for field position. Whereas, everyone knows Coach James Franklin is on a long pathway of rebuilding the once mighty Penn State football program. He’s going to need a few years to get back into the kind of contention for Conference titles and beyond. The performance of PSU’s special teams on average comes up short on both punt and kickoff returns compared to their opponents. They have also allowed two blocked field goals and a blocked punt. These are not good trends and could present a problem for Franklin on Saturday. Expect Ohio State to go for a block if PSU is backed up near its end zone.

Defensively, at first glance there may be some positives for Franklin’s squad. They sport a conference low 15.2 points per game average. Opponents are only netting 2.0 yards per scamper. Senior linebacker Mike Hull has a ridiculous 40 solo tackles and 64 total tackles. This guy has a magnet for every running lane to wrestle down the ball carrier. If a receiver goes over the middle, he will find them too. Senior defensive tackle Zettel is another lunch pail guy with seven tackles for loss and three sacks. Junior cover man Jordan Lucas is their best corner with six passes broken up. So with these athletes making plays Franklin’s team might have a chance, but they haven’t faced an offense like the Buckeyes yet and they don’t get many takeaways, with only one fumble and seven interceptions this year. If Franklin’s unit of defenders has been saving them, this might be a good time to cash in. Coach Franklin’s defense must play inspired football and mix in many schemes to have a chance for an upset. They may even have to provide a score on a turnover to increase the odds.

On the offensive side Coach Franklin’s O-line has been riddled with injuries, which tends to happen at this time of the year. But coupled with limited scholarships, the lack of depth and talent has been a headache for Franklin. Belton is the feature back for the Nittany Lions with 4.1 per tote, but the team only has a 2.8 average on the ground. That’s a far cry from the days of super halfbacks like Franco Harris and Curt Warner. It makes play action passing tough. Signal-caller Hackenburg is not exactly fleet of foot and that has accounted for part of the team’s low average. If he can get into a rhythm with some short throws and a little pass protection he can string together some drives in the air.

He has tossed for 1,600 yards and five scores, but the opponents have captured seven of his passes too. Hamilton and Lewis are fine targets with hands of glue and good speed that each boast over 500 yards. OSU’s coverage schemes will look to take these two options away. Can another guy step up for Penn State? I’m not sure. I believe Hamilton and Lewis will have to be at the top of their game to make plays and give Penn State fans a reason to cheer. This might mean getting them some looks in motion and wide out screens. Franklin may need to resort to a few draw plays, a couple roll outs, and some schemes with double tight ends. It’s possible he might be able to use the over aggressiveness of Ohio State’s defense to his advantage by running some counter plays too. Franklin’s game plan will need to be well-scripted to pull off the upset. When this unit has 3rd and 4th downs it will need clutch play. They’ll have to make the most of every chance they have.

Franklin proved when he was at Vanderbilt that he can inspire players to believe and scheme out a few tactics to give his team an edge, but he has a lot to overcome against a very proven head Coach in Urban Meyer. The 100,000 plus 12th man of Happy Valley will do its part provided the team gives them reason to hope on the field. PSU defeated Rutgers by a 13-10 score, in comparison Ohio State blew Rutgers off the field 56-17. True, OSU may look ahead at the schedule against Michigan State, but Urban Meyer is not likely going to allow his team to overlook Penn State (+14). I do think the Nittany Lions defense will help keep their team in contention for a while, but the Bucks will wear them down. OSU will win time of possession, and the field position battles. Their defense will harass Hackenburg and keep the PSU offense from doing very much. Ohio State (-14) has covered the spread for 4 consecutive games and I do not see that trend ending. Ohio State should win comfortably, 41-20.