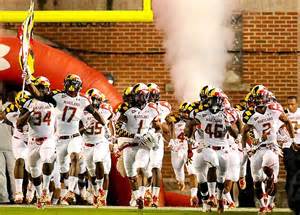 Coming off a strong 50-28 win versus Cincinnati, The Ohio State Buckeyes are back in the groove, favored by 10, and ready to compete for a Big Ten Championship as they begin the conference schedule. The (4-1) Maryland Terrapins are a (+10) underdog and have already begun their conference play with an impressive 37-15 victory at Indiana and will host 3-1 OSU in their inaugural Big Ten season. This is the first match up between the schools, so it may take some years to develop a rivalry as they are in the same division. Never the less, I presume this will be an exciting contest.

Coach Meyer’s OSU offense is starting to really heat up. His young quarterback, J.T. Barrett, is growing into his role and he leads an offense now averaging 42.8 points per game. He has pitched for 1,087 yards with 13 touchdowns (10 in the last 2 games) and five interceptions this year, and has also scampered for 205 yards and a score. Barrett’s cool demeanor and a little growth in reading defenses has been part of his recipe to success. His learning curve as a pocket passer is beyond where Braxton Miller was when he was a Freshman. Ohio State has developed a balanced offense able to fling it in the air and bruise it between the tackles against most teams. They gained 380 yards on the ground last week. Out of the talented backfield, Ezekiel Elliot has emerged as the top charger with a total of 323 at 5.9 per clip. He looks like he is molded from previous OSU greats, such as Jim Otis, Keith Byars, and Eddie George of yester year. I expect him to begin to get more of the carries. Receivers Devin Smith and Michael Thomas are neck and neck for tops on the team in receiving yardage and will both build on what they have. Dontre Wilson continues to contribute both as a receiver, occasional scat back, and a return man with blazing speed. He is first on the team in all-purpose yards at 531.

The defense displayed the ability to get to the quarterback last week, but other than the occasional sack or forcing the opponent to throw it away, the Bucks continue to get gauged by a good passing game for big plays. Cincinnati secured 352 yards in the air and four scores against OSU and might have had more if not for a couple of tough calls by the zebras. Coach Meyer spent a little more time this week with his staff trying to correct their problems. Be it man-to-man or a mix of zones, OSU needs to get better coverage on opposing receivers or they will get burned more. I’m not sure this can be corrected in one week. I anticipate this to be a seaso- long issue that may only slightly improve. The defense is solid on the ground with guys like Joshua Perry and Vonn Bell wrapping people up, but as a unit they are not great. They are also having difficulty in creating turnovers. Meyer’s team so far has been disciplined in regards to penalties, but they aren’t winning the turnover battle. Maryland is their equivalent in discipline, but a little better in getting the other guy to cough up the ball.

Coach Randy Edsall has his underdog ‘Terps off to a good campaign thus far, the offense is averaging 36.8 points and the defenders are giving up roughly half that at 19.8 ppg, yet they are largely untested at this point other than the one blemish on their record, a loss to West Virginia. The best player for Coach Edsall is his do everything senior signal caller, CJ Brown, who leads the team in rushing with 266 yards and 5 scores while tossing for 996 yards and 7 touchdowns. Yet, late in the game last week he injured his wrist and was pulled. It’s a question mark if he can go. Junior backup Caleb Rowe did well the rest of the game hurling for 12 of 18 and two scores, and is serviceable, but he isn’t known as a scrambler. Stefon Diggs is the best of a fine receiving corps, who has 29 catches and 398 yards racked up. He’ll need to perform his best to help Maryland have a chance at victory.

Coach Edsall has a fine set of special teams. Here to, Stefon Diggs helps out with a near 30 yards per kick return. Defensive back, William Likely is a deadly punt returner who already has one score. Opponent’s special teams have not had the same ringing success. Nathan Renfro and Brad Craddock’s legs provide real value in the ‘Terps kicking game. While OSU has good special teams, Maryland has the edge here.

On the defensive side of the ball, the Terrapins have a few standouts. William likely is their best corner with 3 picks and 5 passes broken up despite being 5 foot 7. Sean Davis leads all tacklers with 42 and Andre Monroe has 3 sacks. They do create some turnovers and get some pressure on would be passers. They also give up a steady amount of big plays, but their strength is against the pass if they have one. Their weakness is against the running game and the clue is the leading tackler is a safety. Coach Edsall may need to time some run blitzes and different formations to slow down OSU’s run game, but they may risk vulnerability to a big play downfield.

OSU will exploit the generosity of Maryland’s ground defense both on the edge and between the tackles. That will open up opportunities in the passing game. Maryland, regardless of who starts at Quarterback will paint their share of points on the board. The defenders of each unit will get a play or two in, but not create many turnovers. Either special teams could make a momentum shifting play. I expect a close game. I believe Maryland will cover the plus ten just barely, as I expect OSU to win 30-24.