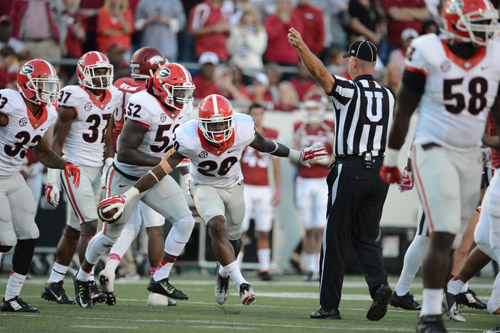 The winless Troy Trojans would probably prefer a time machine so they can skip ahead to the next contest, instead of facing a No. 13 Georgia team with a 1-1 record looking to bounce back from a disappointing conference loss to one of their bitter rivals, South Carolina.

The Bulldogs will be looking to take their frustration out on the next team while being in the comfy confines of their home turf between the hedges and are favored by 41 points. So what gives Troy Head coach Larry Blakeney confidence they can surprise the NCAA landscape? His Quarterback Brandon Silvers has provided a snazzy 66.7 percentage completion rate. Running back Brandon Burks is leading the club with 104 yards at a decent 3.9 yards per tote and is second on the team with 12 receptions and 121 yards in the air. Chandler Worthy tops the team with 157 receiving yards and is a threat to return kickoffs deep every time. The offense averages a decent 20 points a game. The defense has play makers in Montres Kitchens with 22 tackles and an interception, and Femi Odaibo leads all defenders with two picks. Not to mention, when coaches are a plus 41-underdog, they tend to throw caution to the wind and dust off the playbook.

Coach Richt will not take Troy lightly and will prepare his Georgia team to regain momentum so they compete for a conference championship. He has plenty of skilled athletes to work with on all sides of the ball. Hutson Mason quarterbacks an offense averaging 40 per game against quality opponents. Heisman candidate Todd Gurley averages a staggering 9.4 yards per carry. In addition, if you kick the ball off to Gurley he’s proven he can instantly trade it for six points. Freshman backup tailback Nick Chubb has thundered for over 100 yards through a combination of speed and steam rolling ability. Bennet, tops a receiving corps with seven receptions and four other players have at least four receptions, which displays Richt’s offense can spread the wealth around. The Bulldog defense has provided ample pressure on opposing quarterbacks with a total of six sacks in two games against teams with pretty good linemen. Look for them to raise that number even higher this Saturday. Senior linebacker Amarlo Herrera has racked up 23 team leading tackles.

Realistically though Troy is a mid-major school and they do not have near as many top-shelf talents on their roster as Georgia. While I believe the Trojans will but a big play on Georgia’s defense once or twice, it won’t be enough to stay in the same stratosphere. The Bulldogs will be very motivated to impose their decided talent and depth advantage. Marshal Morgan, the UGA place kicker won’t need to worry about field goals, instead he will be getting a lot of work on extra points and kickoffs. I can see the ‘Dawgs piling up points as the defense ultimately shuts down Troy. Look for Georgia to easily cover a 41 point spread.