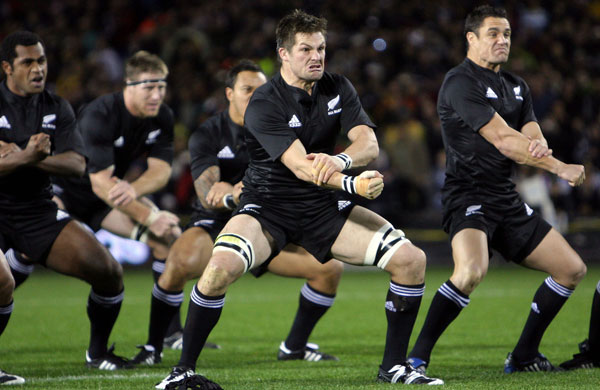 One of the coolest, and most awe-inspiring things I have ever seen (and I’ve seen it done in person before) is the HAKA! For those of you who have no idea what the Haka is, it is a Maori traditional war dance that for over one hundred years has been incorporated into Rugby pre-game festivities by professional Rubgy players of Maori heritage. It’s such a great rush to watch. Check it out in the Video link below where you can watch the New Zealand national rugby team perform a Haka.

What did I say last week about Deflate-gate? I believe I said some no-name dude assistant is going to have the deflation baloney pinned upon them. The NFL reported today that some mysterious equipment assistant is the top suspect.

While I’m on the subject, Richard Sherman is getting on my last nerve! He has the gall to complain and say the Patriots are without integrity. Well on September 26th 2012, when the replacement refs robbed Green Bay of the interception in the end zone and rewarded to Seattle a touchdown they clearly didn’t earn, I don’t remember “Mr. Integrity” coming out and demanding the refs get it right and take the touchdown away from his team. Seattle was given a victory by the botched call. Mr. Sherman, you are being a hypocrite and frankly I thought you were far more intelligent than that. Demand the same from your team and the referees as you would demand from others please. Just to remind our readers I am attaching a video link for your review.

Of course Ray Lewis, former All-Pro linebacker and sure fire HOF’R, has to toss in his two cents. He of all people wants to add an asterisk to the Patriots already, he says for cheating. I think Ray Lewis and Richard Sherman live in the same glass house. Isn’t Ray Lewis aware of innocent until proven guilty? Oh, and Ray, if I ever have another nagging injury that just won’t heal fast enough do you have a preferred brand of deer antler velvet spray to recommend? If Asterisks are going to be added to the Patriots we might want to add them for other Super Bowls too. Should we start with your second title?

Kobe Bryant of the LA Lakers is out for this season again, this time for a shoulder injury. I do hope he comes back, but plays at a less rigorous pace for one more year and maybe he can go out with a Ted Williams or Derek Jeter moment. Any maybe, just maybe he could be in the playoffs one more time. Seriously, Kobe was one of the greatest basketball players we have ever seen in his prime.

What? Since when did the NHL allow three-point shots? The NHL All-STAR game was a scoring exhibition 17-12! Were volunteers in the net when they played this game, dressed in a hockey outfit?