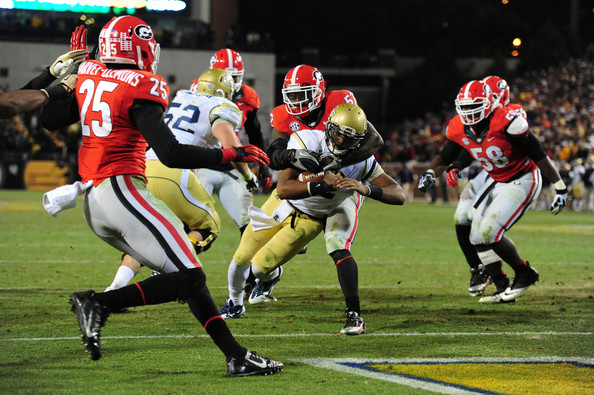 This Saturday between the hedges, an interstate, inter-conference rivalry known as “Clean, old-fashioned hate” will be renewed. The (9-2) Georgia Bulldogs of the SEC will host the (9-2) Georgia Tech Yellow Jackets of the ACC. UGA is favored by (-13) points. Both universities have had a fine season and are both likely to be in their conference championship games. Whoever loses this game puts a damper on the entire season. It all started in 1893 when the White and Gold of Tech took the train for a 70 mile ride into Athens and proceeded to stomp on the Red and Black of UGA by a score of 28-6. The bitterness began when the founders of Tech rejected the opportunity to be a part of UGA, but instead chose North Atlanta. Dr. Herty, the first Head Coach of the ‘Dawgs was not a fan of gold being originally a part of the UGA uniform with the red and black because he believed Gold was similar to the cowardly color of yellow. The Tech founders knew this and chose the Gold as an insult toward Georgia. After the first painful defeat, Coach Herty removed gold from the UGA uniform permanently.

In 1963, after a feud with Alabama’s Bear Bryant, Tech’s Coach Bobby Dodd took his team out of the SEC. Later, when he tried to bring Tech back to the SEC, guess who was the biggest opponent of Tech’s return? Yep, Georgia made sure the Ramblin’ Wreck did not get back in the conference.

Over the next 10 years the schools faced each other 6 more times. In every single one of those contests the ‘Dawgs shutout the Yellow Jackets. From 1904 to 1909 Georgia Tech would return the favor with consecutive victories. This wonderful rivalry has had some of the game’s biggest names take part: John Heisman, Fran Tarkenton, Bobby Dodd, Herschel Walker, Vince Dooley, Keith Brooking, and A. J. Green. Over the years the two schools have traded periods of streaks over one another, but UGA has definitely got the better of Tech with a 64-39-5 series lead. Currently UGA has a 12 out of 13 streak going against the White and Gold.

Coach Paul Johnson’s visiting squad still relies on a strong ground game that is operated out of the not so common Flexbone triple option. It does allow for passing if you are able to get the right talent. Every few years Tech seems to develop a wide out with 1st round draft pick ability: Calvin Johnson and Demaryius Thomas are a couple names that come to mind. This year Tech has shown a propensity to heave the ball in the air for some serious yardage. Signal Caller Justin Thomas has tossed for nearly 1,400 yards and 15 strikes, while only throwing 4 interceptions. His favorite target is the 6 ft. 3 in., 220 pound senior DeAnrde Smelter, who has captured 32 balls for 671 yards and 7 tds. His longest catch went for 71! On the ground Zach Laskey and Synjyn Days provide the additional pieces to a triple option game that QB Justin Thomas leads. The steady offensive line helps push open holes for the nation’s 3rd best running attack of about 329 yards a game.

Georgia’s Offense also boasts a strong ground game, despite losing their Heisman contending starting tailback Todd Gurley first to suspension and then to a season ending injury in the Auburn game, Freshman Nick Chubb has stepped up and been sensational, churning out 1,152 yards and 11 visits to the end zone. When he needs a breather, reserves, Sony Michel and Brandon Douglass have both demonstrated the wheels and moves to put six points on the board. The ’Dawgs O-line must be given credit as well as they have a way of creating some nice running lanes. Being experienced, strong and athletic, it’s simply one of the best lines in the country. If they get in sync going downhill, look out. Hutson Mason has been a quietly reliable Quarterback with just under 70% of his passes completed for 1,800 yards plus and 19 Tds while only throwing 3 interceptions. In fact, UGA rarely turns the ball over. Mason achieved this while UGA’s two most talented receivers have been out most of the year with injuries. Like Tech, UGA uses the running game to open up passing lanes, control the clock, and momentum, but they do it out of pro football formations.

So what about the defenses? Coach Richt has a strong unit that ranks as the 13th best statistically. There are many for the Red and Black that can wrap up ball carriers and get after the Quarterback. Middle Linebacker Amarlo Herrea and Coverman Damian Swann are fine leaders who show their teammates every week how it’s done. The Bulldogs D’ not only forces a lot of punts, but also creates lot of turnovers. UGA is # 2 in the country in the turnover margin. Meanwhile, Tech is not so great overall, they are ranked 61st in the country on defense, but they have a knack for creating turnovers too and are 9th best in the country in that respect.

I don’t see special teams as an issue for either squad, but both coaches might try to play for field position and be conservative. However, Coach Johnson may try a fake field goal or fake punt at least once since Florida was able to fool the ‘Dawgs earlier this season and grab momentum with a little trickery. Florida never looked back and won 38-20. Richt’s club will have to be more alert for those kinds of surprises this time.

In the end, it’s going to come down to the line of scrimmage and who can establish a consistent running attack. Both teams rely on the legs to move the chains, and then when the opposition puts eight in the box, they open up the play calling and let the arm of the QB wheel and deal. Neither team really wants to need a two minute passing drill to win the game and especially not to fall behind by a large margin.

These contests between Tech and UGA tend to be very competitive and sometimes very close. I project the same. I do not expect UGA to cover, but they will get the win as they have the tougher defense. Georgia will win 30-22.